Banks are getting into the mobile phone business to harvest more data from customers and keep customers on their apps.

Both traditional banks and internet-only banks are getting in the game.

“The data we can get as a financial company and the data we can get by offering telecom services are different,” said KB Kookmin Bank spokesman Hur Woong. “KB aims to deliver more sophisticated financial products based on collected mobile usage data.”

Viva Republica, the internet-only operator of Toss Bank, announced on July 21 that it had signed an agreement to acquire Merchant Korea, an MVNO, for 300 billion won ($230 million).

KB Kookmin Bank launched Liiv M with LG U+ in 2019. It is also working with KT and plans to work with SK Telecom later this year. KB Kookmin Bank borrows the networks of the three largest telephone companies to offer affordable mobile phone plans to customers. Shinhan Bank markets phone plans on its banking application.

The number of MVNO service users exceeded 10 million in 2021, according to the Ministry of Science and ICT, and there are about 70 local MVNO providers. 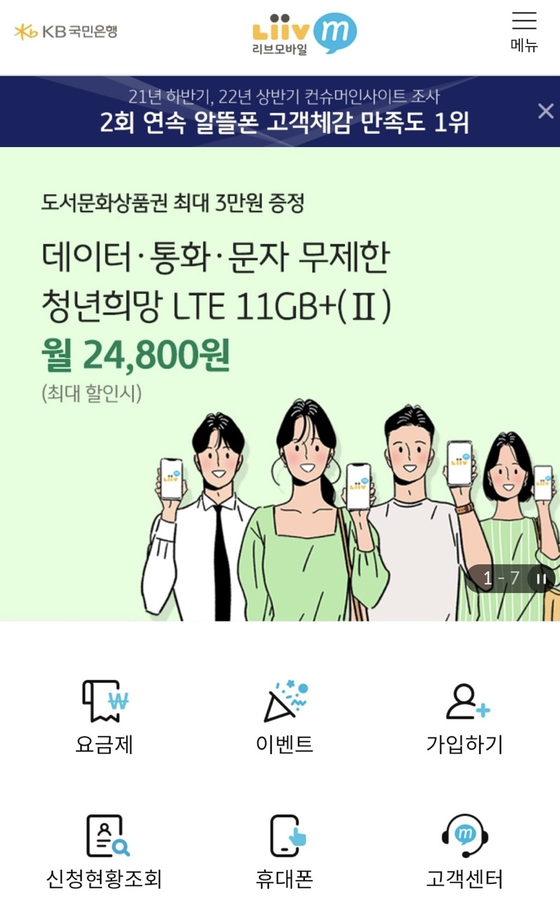 KB appeals to users by offering discounts on mobile phone plans to customers who sign up for their financial products, including savings accounts, in a bid to lock customers into its app.

Banks are required to obtain regulatory approval from the Financial Services Commission in order to operate non-banking services. KB Kookmin Bank received permission to operate an MVNO in 2019.

CrePass, a credit-scoring startup, uses data, including mobile data, to score the credit of light filers, who lack a sufficient financial history. Woori Bank also offers loans to light filers based on their telecom usage.

“There are people who don’t have sufficient financial records, such as housewives and students,” said Bae Hyun-il, a spokesperson for Woori Financial Group. “There are no standards to assess their credit rating. But by assessing the timely payment of telecom charges, we can build alternative credit rating models. Although the market is not large, this could be a chance for the bank to find potential customers.”

Viva Republica said it acquired Merchant Korea, an MVNO, as it sees the market as very promising and profitable.

“We acquired the company because we believe the industry itself will grow,” said Kim Jin-ho, a spokesperson for Viva Republica. “The three major telecom companies – SK Telecom, KT, LG U+ – hold around 50% of the MVNO market but are unable to actively expand service due to regulatory discussions. This means opportunities for small and medium enterprises. .”

“Small and medium sized MVNOs have not been able to grow due to lack of branding, customer management and accessibility. We believe Toss would be able to solve this problem.”

Merchant Korea uses the networks of the three major telecommunications companies and has around 100,000 users.

Viva Republica’s acquisition of an MVNO “should generate synergy effects with its financial products,” said Lee Kyung-eun, an analyst at KB Securities. “By combining financial and telecommunications services and offering customer discounts, it will be able to attract more customers and increase its competitiveness by building customer loyalty to its application.”

Flipkart re-enters the mobile industry with the MarQ brand

Forme Communications Technology and Advantage Computers India are the two companies that will manufacture these smartphones This comes after Flipkart entered the smartphone segment in 2017 with the launch of its own mobile, Billion Capture+ under the Billion brand. In 2018, Flipkart’s private brand MarQ launched air conditioners and smart TVs under its private brand […]

From first to sixth: Huawei’s phone business goes bankrupt thanks to US sanctions

Enlarge / A live visit to Huawei headquarters. Trade war! United States vs. China See more stories US sanctions against Huawei are really taking hold. A new report from Canalys Research shows that Huawei slipped to sixth place for global phone sales in the fourth quarter of 2020, a dramatic drop from its top spot […]

Huawei’s phone business would be decimated without Google’s Android

Sunday night’s news that Google would comply with a US government executive order and suspend business with Huawei is one of the most dramatic moments in Android history. Huawei, China’s most prolific smartphone vendor, had started 2019 with explosive double-digit growth and was on track to eclipse Samsung as the world’s top phone maker by […]